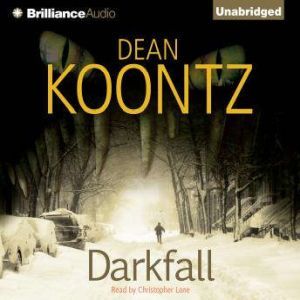 Winter gripped the city. Terror gripped it, too. They found four corpses in four days, each more hideous than the last.At first the cops thought they were dealing with a psychopath. But soon they heard eerie sounds in the ventilation system—and saw unearthly silver eyes in the snow-slashed night.In a city paralyzed by a blizzard, something watches, something stalks.…

I've been a fan of Dean Koontz for many years, and I was delighted to learn that some of his older works were being put to audio. In my print book days, I would grab a bunch of his novels and read them back to back until I had scared myself silly and needed to take a break. Darkfall brought back that feeling of being on the edge of my seat, frantically turning the pages, breathlessly awaiting the next event. However, this time it was in audio form. I absolutely enjoyed it. If you love vintage Koontz novels, you will too.