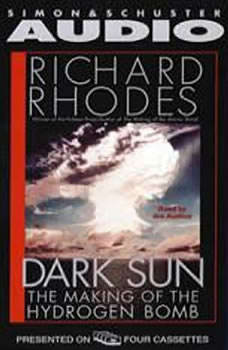 Dark Sun: The Making of the Hydrogen Bomb

The author of The Making of the Atomic Bomb lays bare the secret heart of the Cold War.Richard Rhodes' landmark history of the atomic bomb won the Pulitzer Prize, the National Book Award and the National Book Award and the National Book Critics Circle Award. Now, in this majestic new masterpiece of history, science, and politics, he tells for the first time the secret story of how and why the hydrogen bomb was made, and traces the path by which this supreme artifact of twentieth-century technology became the defining issue of the Cold War.From the day in 1941 when the first word of Anglo-American atomic-bomb research arrived in Moscow to the week of the 1962 Cuban missile crisis, DARK SUN is full of unexpected -- and sometimes hair-raising -- revelations based on previously undisclosed Soviet and U.S. sources, including:How the Soviets were able to produce a carbon copy of the first U.S. atomic bombHow the SAC fought for independent control of U.S. nuclear weapons -- while flying deliberately provocative daytime missions over Soviet citiesHow the first and only direct nuclear confrontation between the superpowers was also very nearly the lastFollowing the lives of the atomic scientists on both sides of the Iron Curtain, Dark Sun is the definitive work on the hydrogen bomb, showing why the world wars that devastated the first half of the century can never happen again.

The Button
by Tom Z. Collina