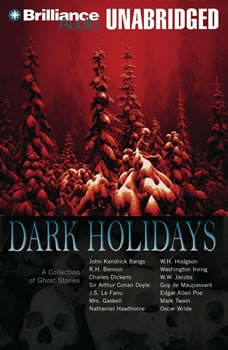 Feeling a chill amidst the warmth of the season? Sensing a shadow lurking behind the tinsel and lights? Experience the darker visions hidden within our brightest holiday. Come listen to the water ghost’s story as she spends Christmas Eve haunting Harrowby Hill. Listen as Charles Dickens examines the figure which haunts “The Signalman,” and Edgar Allan Poe details the secret of “The Oval Portrait.” You’ll shiver as “The Monkey’s Paw” twitches grimly in the cold and enjoy Mark Twain’s fascinating yarn about a ghostly giant warming himself at the fireplace.Sixteen unabridged tales of spirits to playfully darken the holidays and add chill to a winter’s night:“The Traveller” by R. H. Benson“The Water Ghost of Harrowby Hall” by John Kendrick Bangs“The Oval Portrait” and “The Black Cat” by Edgar Allan Poe“A Ghost Story” by Mark Twain“The Wolf" by Guy de Maupassant“The Adventures of the German Student” by Washington Irving“The Monkey’s Paw” by W. W. Jacobs“From the Tideless Sea” by W. H. Hodgson“Madam Crowl’s Ghost” by J. S. Le Fanu“The Canterville Ghost” by Oscar Wilde“Doctor Heidegger’s Experiment” by Nathaniel Hawthorne“The Old Nurse’s Story” by Mrs. Gaskell“The Black Veil” and “The Signalman” by Charles Dickens“Selecting a Ghost” by Sir Arthur Conan DoyleRead by Tom Casaletto, Sandra Burr, Leanor Reizen, Jim Bond, Roger Dressler, and Michael Page

Revelation of the Magi
by Brent Landau

Each Christmas, adults and children alike delight at the story of the kings from the East who followed the star to Bethlehem to offer gifts to the newborn Christ. While this familiar tale is recorded in the Gospel of Matthew, another little-known ve...

Joy to the World
by Scott Hahn

What could be more familiar than the Christmas story--and yet what could be more extraordinary? The cast of characters is strange and exotic: shepherds and magicians, an emperor and a despot, angels, and a baby who is Almighty God. The strangeness c...

Christmas is a great time to give a non-Christian friend or church visitor a short book getting to the heart of what it's truly all about. This is perfect for giving out at church events, or with a present.Music is everywhere at Christmas chart-...

From pastor and New York Times bestselling author Timothy Keller comes the perfect gift for the Christmas holiday—a profoundly moving and intellectually provocative examination of the nativity story Even people who are not practicing Christian...

When Stuevers narrative begins, hes standing in line with the people waiting to purchase flatscreen TVs at Best Buy on Black Friday, the opening of the Christmas shopping season. From there he follows a number of key residents of Frisco, Texas, as t...

The Pine Tree at St. Martin
by Paulo Coelho

From the internationally bestselling author of The Alchemist comes The Pine Tree at St. Martin, a never-before-published Christmas parable for the ages. Fans of Paulo Coelho will immediately recognize the master storyteller's incomparable voice, an...

The Dawning of Indestructible Joy
by John Piper

The Christmas season is often one of the busiest and most stressful times of the year, and its easy to lose sight of what makes it special. Helping us refocus on whats truly important, well-known pastor and author John Piper leads readers throug...

At a time when Christian values are challenged—when the greeting "Merry Christmas" has been replaced by the supposedly less offensive "Happy Holidays"—Governor Sarah Palin makes the case for bringing back the freedom to ...

Throughout his almost four decades of life on the road, Charles Kuralt has introduced us to people and places that have warmed our hearts. Now in Charles Kuralt's Christmas, he retraces his most memorable Christmas sojourns to remind us of the many ...