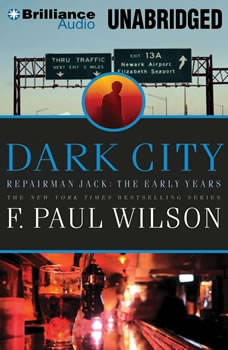 “Repairman Jack is one of my favorite characters—I’m full of happy anticipation every time I hold a new RJ novel in my hands.” —Charlaine Harris, author of the Southern Vampire mysteries featuring Sookie StackhouseIt’s February 1991. Desert Storm is raging in Iraq but twenty-two-year-old Jack has more pressing matters at home. His favorite bar, The Spot, is about to be sold out from under his friend Julio. No longer merely reactive, Jack takes the &#64257;ght to his enemies and demonstrates his innate talent for seeing biters get bit. With a body count even higher than in Cold City, Dark City hurtles Jack toward the climax of this formative New York odyssey in which all scores will be settled, all debts paid.Dark City is the second of three new novels revealing the early years of Repairman Jack, one of the most popular characters in contemporary dark fantasy: a self-styled “fix-it” man who is no stranger to the macabre or the supernatural, hired by victimized people who have nowhere else to turn.