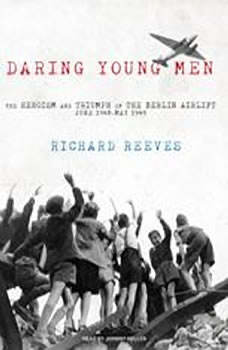 Daring Young Men: The Heroism and Triumph of the Berlin Airlift---June 1948-May 1949

The Second World War had been over for three years when pilots, navigators, and air traffic controllers all over America were recalled to active duty to rescue Berlin. They were there within days and weeks, flying tired planes filled with food, coal, medicine, and mail. Many had bombed the place to rubble in 1944 and 1945. Now they and the British airmen were bringing it survival. Drawing on hundreds of interviews in the United States, Germany, and Great Britain, bestselling author Richard Reeves tells the stories of these civilian airmen, the successors to Stephen Ambrose's "Civilian Soldiers," ordinary boys called to extraordinary tasks. Soviet dictator Joseph Stalin had ordered Berlin blockaded, betting that the Americans, the British, and the French would abandon the city. Many of President Truman's advisers wanted to retreat; others wanted to risk war with the USSR. Truman ordered the Berlin Airlift, neither retreat nor confrontation. It ended only when West Germany was established by the three powers and NATO was born. The Soviets did the backing down. Led by Generals Lucius Clay and Curtis LeMay, the first battle in the Cold War was won. The young men came home again, some of them trying to remember where they had left their cars.

THIS SHOWS HOW GOOD THE USA,GREAT BRITAIN,AND FRANCE WERE.EXPECIALLY THE USA.THE PEOPLE OF WEST BERLIN SAID THE USA IS THE BEST COUNTRY IN THE WORLD. I AM A PILOT SO TO KNOW WHAT THESE MEN DID WITH THE EQUIPMENT THEY HAD BACK THEN WAS OUTSTANDING. I DON'T KNOW EVEN WITH THE EQUIPMENT WE HAVE NOW IF WE COULD DO THAT GOOD.