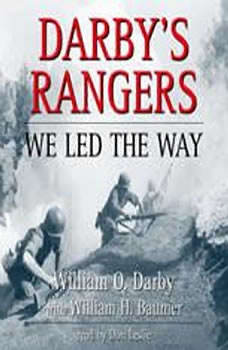 Darby's Rangers: We Led the Way

The exciting true story of a legendary leader and the men who fought by his side in World War II, told in his own words

From the moment they hit the beaches in North Africa to their last desperate struggle at Anzio, Darby’s Rangers asked for only one thing in World War II—the chance to fight. Experts at amphibious landings, night attacks, and close combat, the Rangers were the spearhead advancing U.S. forces. And at their helm was William O. Darby, a forceful, charismatic man who inspired, and was inspired by, his troops. Against overwhelming odds in Tunisia, through the concentrated hell at Gela, on to the final kill at Messina and the Italian mainland, Darby and his Rangers led the way. Darby’s Rangers is an authentic war story, as vivid as the action itself.

“Proud reading . . . of value to a new generation of military historians and ‘battle buffs.’”—Military Affairs Magazine