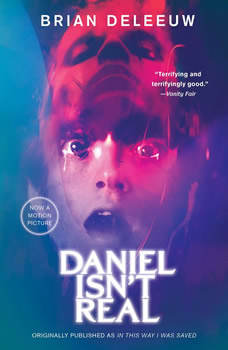 Now a major motion picture! A breathtaking debut of literary suspense about a young boy’s struggle against his inner demons—a fight to the death against his secret shadow self. On a chilly November afternoon, six-year-old Luke Nightingale’s life changes forever. On the playground across from the Metropolitan Museum of Art, he encounters Daniel. Soon the boys are hiding from dinosaurs and shooting sniper rifles. Within hours, Luke and his mother, Claire, are welcoming Daniel into their Upper East Side apartment—and their lives. Daniel and Luke are soon inseparable. With his parents divorcing, Luke takes comfort in having a near-constant playmate. But there’s something strange about Daniel, who is more than happy to bind himself to the Nightingales. The divorce has cut Luke’s father out of the picture, and as his increasingly fragile mother struggles with the insidious family depression, Daniel—shrewd, adventurous, and insightful—provides Luke both recreation and refuge. As Luke grows from a child to an adolescent to a young man, he realizes that as much as his mother needs him, Daniel needs him more. Jealous of Luke’s other attachments, Daniel moves from gestures of friendship into increasingly sinister manipulations. In the end, Luke finds himself in a daily battle for control of his own life—wondering whether he or Daniel will emerge victorious. Brian DeLeeuw’s debut is a haunting and provocative story of a family’s love and madness that you will not be able to put down. *This title was previously published as In This Way I Was Saved.