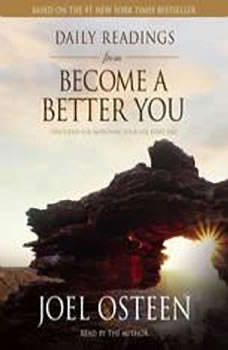 Daily Readings from Become a Better You: Devotions for Improving Your Life Every Day

No Matter What You Are In Life, You Can Be Better! In Become a Better You, pastor and bestselling author Joel Osteen provided 7 key principles designed to improve and enrich every area of your life and explained how each will positively impact your goals, your confidence, your relationships, and your spiritual life. With this devotional, Joel offers inspiring, thought-provoking messages, words of encouragement, and valuable scripture that emphasize the message of Become a Better You. This specially selected collection of biblical passages is designed to inspire you toward becoming all that God created you to be. Joel draws upon personal anecdotes to show the listener how he and others have used the 7 principles to better themselves and deepen their relationship with God. As you incorporate Joel's easy-to-grasp concepts into your life, you will be pleasantly surprised at how much more God has in store for you, and how quickly you become a better you!

Offers a moving and humane approach to understanding life's windstorms.Raises many questions that will challenge your mind and test your faith regarding the ultimate questions of life and death.From the Hardcover edition.

AVAILABLE ONLY ON AUDIO…TEN OF JOEL OSTEEN’S MOST INSPIRING SERMONS, RECORDED LIVE AT LAKEWOOD CHURCH!To live in God’s favor is to live a life filled with hope, abundance and joy. God has a new beginning in store for you! Whatever ...