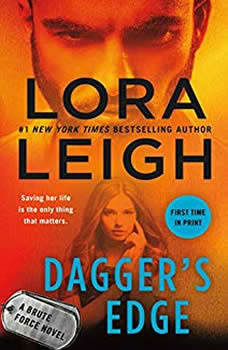 #1 bestselling author Lora Leigh is back—with a vengeance—in her latest audiobook of passion and intrigue, Dagger's Edge, featuring the men of Brute Force.Ivan Resnova wants nothing more than to escape his hard, brutal past. Starting over is not so easy once you’ve been a powerful crime boss but now, instead of being punished for his alleged crimes, Ivan fears that the one woman he can’t forget is in danger of paying the price. Crimsyn “Syn” Delaney thought the danger she’d faced was over, and that she could resume her life. She never imagined it would return with a vengeance and throw her back into Ivan’s world. But when an attempt is made on her life, she needs Ivan more than ever to keep her safe—even if she is in danger of falling deeply and dangerously in love. . .“Leigh’s books can scorch the ink off the page.”—RT Book Reviews

Some small towns grow really good-looking men! This is the case with the four Chase brothers. The homegrown hotties are on the wish list of every single woman in town, and Maggie Wright is no exception. Maggie has finally had it with the men she's b...

From New York Times bestselling author Lora Leigh comes Wicked Lies, a sizzling audiobook of the Men of Summer-their ways and means, and the women they desire...HE'S TEMPTING FATEJazz Lancing is the stuff of legends. A mountain-bred ex-Navy SEAL wit...