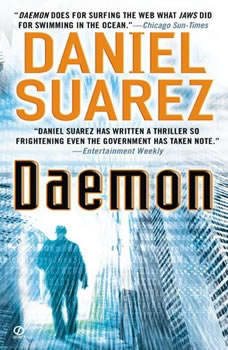 Daemons: computer programs that silently run in the background, waiting for a specific event or time to execute. They power almost every service. They make our networked world possible. But they also make it vulnerable...

When the obituary of legendary computer game architect Matthew Sobol appears online, a previously dormant daemon activates, initiating a chain of events that begins to unravel our interconnected world. This daemon reads news headlines, recruits human followers, and orders assassinations. With Sobol’s secrets buried with him, and as new layers of his daemon are unleashed, it’s up to Detective Peter Sebeck to stop a self-replicating virtual killer before it achieves its ultimate purpose—one that goes far beyond anything Sebeck could have imagined...

Danny Cartwright and Spencer Craig never should have met. One evening, Danny, an East End cockney who works as a garage mechanic, takes his fiancee up to the West End to celebrate their engagement. He crosses the path of Spencer Craig, a West End ba...