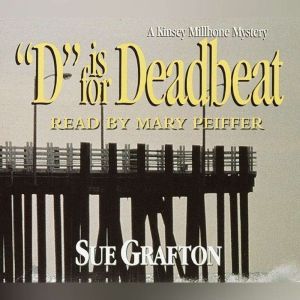 D Is for Deadbeat

He calls himself Alvin Limardo, and the job he has for Kinsey is cut-and-dried: locate a kid who's done him a favor and pass on a check for $25,000. Stiffed for the retainer, Kinsey finds out Limardo's real name is John Daggett... ex-con, ex-liar-, ex-alchy, currently dead.

The cops call it an accident but Kinsey differs. Look at his life! A lot of people hated him, from much-abused wives, to drug dealers out big money, to the families of five people he killed driving drunk. In short, Daggett wasn't popular.