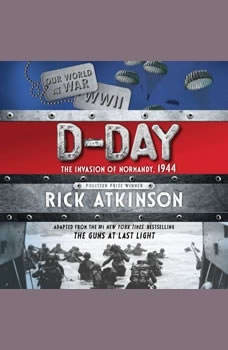 Adapted for young readers from the #1 New York Times–bestselling The Guns at Last Light, D-Day captures the events and the spirit of that day—June 6, 1944—the day that led to the liberation of western Europe from Nazi Germany's control. They came by sea and by sky to reclaim freedom from the occupying Germans, turning the tide of World War II. Atkinson skillfully guides his younger audience through the events leading up to, and of, the momentous day in this photo-illustrated adaptation. Perfect for history buffs and newcomers to the topic alike!This thoroughly-researched and documented book can be worked into multiple aspects of the common core curriculum.

Autumn 1944. World War II is nearly over in Europe, but in the Pacific, American soldiers face an enemy who will not surrender, despite a massive and mounting death toll. Meanwhile, in Los Alamos, New Mexico, Dr. J. Robert Oppenheimer and his team o...

Courage Has No Color, The True Story of the Triple Nickles
by Tanya Lee Stone

World War II was raging, with thousands of American soldiers fighting overseas against the injustices brought on by Hitler. Back on the home front, the injustice of discrimination against African Americans was playing out as much on Main Street as i...

Early on the morning of December 7, 1941, the Empire of Japan launched a massive surprise attack on the US naval base at Pearl Harbor in Hawaii. Two brief and terrible hours later, much of the American fleet lay sunk or burning; 2,388 Americans were...

Discover legendary commanders, tremendous fights, elite soldiers, and courageous individuals whose deeds truly made the difference in this jaw-dropping guide to the biggest war the world has ever seen.From massive aerial battles that clouded the ...

The author of the award-winning The Nazi Hunters returns with another thrilling true story of WWII espionage, including Nazis, nukes, fighting, failure, and everyday heroes. April 9, 1940. The invasion begins at night, with German cruisers slippi...

Critically acclaimed Sibert Honor author Deborah Hopkinson brings to bold life the remarkable story of the Danish resistance and rescue of over 7,000 Jews during WWII. When the Nazis invaded Denmark the morning of Tuesday, April 9, 1940, the peopl...

The Battle of the Bulge
by Rick Atkinson

On the 16th of December, 1944, in the frozen forests of the Ardennes, the German army attacked American Allied forces, launching a final bid to turn the tide of World War II. Thus began the long, hard slog of a battle that was nicknamed by the media...