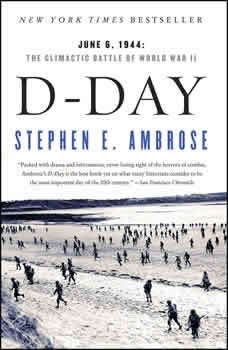 They wanted to be throwing baseballs, not hand grenades, shooting .22s at rabbits, not M-1s at other men. But when the test came, when freedom had to be fought for or abandoned, they fought. They were soldiers of democracy. They were the men of D-Day. When Hitler declared war on the United States, he bet that the young men brought up in the Hitler Youth would outfight the youngsters brought up in the Boy Scouts. Now, in this magnificent retelling of the war's most climactic battle, acclaimed Eisenhower biographer and World War II historian Stephen E. Ambrose tells how wrong Hitler was. Drawing on hundreds of oral histories as well as never-before-available information from around the world, Ambrose tells the true story of how the Allies broke through Hitler's Atlantic Wall, revealing that the intricate plan for the invasion had to be abandoned before the first shot was fired. Focusing on the 24 hours of June 6, 1944, D-Day brings to life the stories of the men and women who made history -- from top Allied and Axis strategic commanders to the citizen soldiers whose heroic initiative saved the day. From high-level politics to hand-to-hand combat, from winner-take-all strategy to survival under fire, here is history more gripping than any thriller -- the epic story of democracy's victory over totalitarianism.