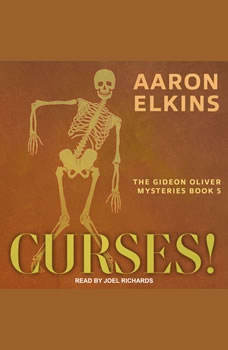 Mayan ruins in the Yucatan . . . a secret room in a tomb . . . age-old skeletons. To anthropologist Gideon Oliver, the renowned Skeleton Detective, the invitation to join the archaeological excavation of Tlaloc promises two months of paradise on Earth. That is, until an ancient series of Mayan curses against desecrators of the site is unearthed. When the first one comes to pass ("The bloodsucking kinkajou will come freely among them"), it is taken by all as a practical joke. But by the time the fourth one is apparently consummated ("The one called Xecotcavach will pierce their skulls so that their brains spill onto the earth"), nerves have begun to fray and suspicions and discord are mounting. The steamy jungles weigh down on the band of eccentric anthropologists as one by one the curses continue to materialize. It takes Gideon's special talents for deduction—along with the enigmatic insights of Mexico's one and only Mayan Indian inspector of the state judicial police—to resolve an ancient riddle and a modern, murderous mystery.