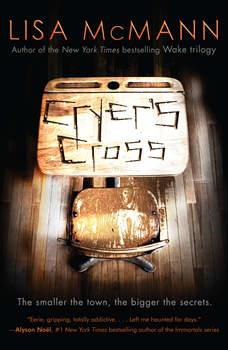 The community of Cryer’s Cross, Montana (population 212) is distraught when Tiffany, a high-school freshman, disappears without a trace. Plagued by OCD, sixteen-year-old Kendall is freaked out by the empty desk in the one-room schoolhouse, and is relieved when her boyfriend Nico takes the seat. And then he goes missing too. An increasingly anxious Kendall finds herself drawn to the desk: If she sits there, will she also vanish? But instead of vanishing, something appears: eerie graffiti messages on the desk’s surface that could only be from Nico. Desperate to help him, Kendall stumbles upon some ugly—and deadly—local history. And she’s about to find out just how far the townspeople will go to keep their secrets buried….