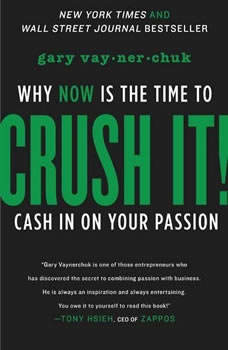 Crush It!: Why NOW Is the Time to Cash In on Your Passion

Crush It! 2.0: The Audiobook: Read by Gary Vaynerchuk, this audiobook version contains additional material not found in the bestselling hardcover edition.Do you have a hobby you wish you could indulge in all day? An obsession that keeps you up at night? Now is the perfect time to take that passion and make a living doing what you love. In Crush It! Why NOW Is the Time to Cash In on Your Passion, Gary Vaynerchuk shows you how to use the power of the Internet to turn your real interests into real businesses. Gary spent years building his family business from a local wine shop into a national industry leader. Then one day he turned on a video camera, and by using the secrets revealed here, transformed his entire life and earning potential by building his personal brand. By the end of this book, readers will have learned how to harness the power of the Internet to make their entrepreneurial dreams come true. Step by step, Crush It! is the ultimate driver's manual for modern business.