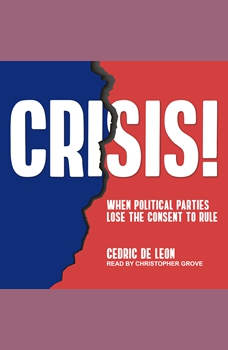 Crisis!: When Political Parties Lose the Consent to Rule

American voters have long been familiar with the phenomenon of the presidential frontrunner. In 2008, it was Hillary Clinton. In 1844, it was Martin Van Buren. And in neither election did the prominent Democrat win the party's nomination. Insurgent candidates went on to win the nomination and the presidency, plunging the two-party system into disarray over the years that followed. In this book, Cedric de Leon analyzes two pivotal crises in the American two-party system: the first resulting in the demise of the Whig party and secession of eleven southern states in 1861, and the present crisis splintering the Democratic and Republican parties and leading to the election of Donald Trump. Recasting these stories through the actions of political parties, de Leon draws unsettling parallels in the political maneuvering that ultimately causes once-dominant political parties to lose the people's consent to rule. Crisis! takes us beyond the common explanations of social determinants to illuminate how political parties actively shape national stability and breakdown.