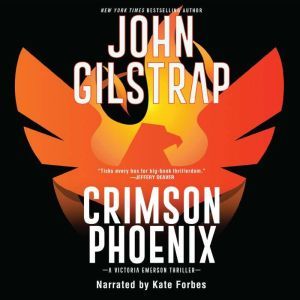 "The novel seizes you on page one and never lets go . . . this riveting book will stay with you long after you finish it. And to top it all off, he's created one of the most singular and compelling heroines to come along in years." —Jeffery Deaver, New York Times bestselling author "Snaps with action from the very first page." —Marc Cameron, New York Times bestselling author of Stone Cross and of Tom Clancy's Code of Honor From John Gilstrap, the New York Times and USA Today bestselling author of the Jonathan Grave novels, comes Crimson Phoenix—first in the new Victoria Emerson Thriller series. With America brought to the brink of destruction, one woman becomes the last hope of a nation and its people . . . Victoria Emerson is a congressional member of the U. S. House of Representatives for the state of West Virginia. Her aspirations have always been to help her community and to avoid the ambitious power plays of her peers in Washington D. C. Then Major Joseph McCrea appears on her doorstep and uses the code phrase Crimson Phoenix, meaning this is not a drill. The United States is on the verge of nuclear war. Victoria must accompany McCrea to a secure bunker. She cannot bring her family. A single mother, Victoria refuses to abandon her three teenage sons. Denied entry to the bunker, they nonetheless survive the nuclear onslaught that devastates the country. The land is nearly uninhabitable. Electronics have been rendered useless. Food is scarce. Millions of scared and ailing people await aid from a government that is unable to regroup, much less organize a rescue from the chaos. Victoria devotes herself to reestablishing order—only to encounter the harsh realities required of a leader dealing with desperate people . . . "A gripping page-turner." —Taylor Stevens, New York Times bestselling author "An explosive story that keeps your mind churning and pulse racing . . . Don't miss this powerful new series from a master thriller writer." —Jamie Freveletti, international bestselling and award-winning author