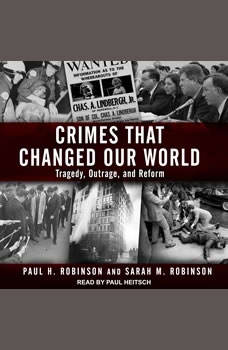 Crimes That Changed Our World: Tragedy, Outrage, and Reform

Crimes That Changed Our World explores some of the most important trigger cases of the past century, revealing much about how change comes to our modern world. The exact nature of the crime-outrage-reform dynamic can take many forms, and Paul and Sarah Robinson explore those differences in the cases they present. Each case is in some ways unique but there are repeating patterns that can offer important insights about what produces change and how in the future we might best manage it. Sometimes reform comes as a society wrestles with a new and intolerable problem. Sometimes it comes because an old problem from which we have long suffered suddenly has an apparent solution provided by technology or some other social or economic advance. Or, sometimes the engine of reform kicks into gear simply because we decide as a society that we are no longer willing to tolerate a long-standing problem and are now willing to do something about it. As the amazing and often touching stories that the Robinsons present make clear, the path of progress is not just a long series of course corrections; sometimes it is a quick turn or an unexpected lurch. In a flash we can suddenly feel different about present circumstances, seeing a need for change and can often, just as suddenly, do something about it.

Saint Thomas Aquinas, an Italian philosopher and Dominican friar who lived during the thirteenth century, was the greatest of the medieval theologians. His writings harmonized faith and reason, which resulted in a Christian form of rationalism. Thi...

“I called this book Out of Order because it reflects my goal, which is to share a different side of the Supreme Court. Most people know the Court only as it exists between bangs of the gavel, when the Court comes to order to hear arguments or ...

The Ecology of Law
by Fritjof Capra

WINNER OF THE 2015 IBPA BENJAMIN FRANKLIN AWARD IN POLITICS/CURRENT EVENTSThe Ecology of Law Fritjof Capra and Ugo Mattei argue that at the root of many of the environmental, economic, and social crises we face today is a legal system based on an ob...

In this remarkable book, a national bestseller in hardcover, Sandra Day O’Connor explores the law, her life as a Supreme Court Justice, and how the Court has evolved and continues to function, grow, and change as an American institution. Traci...

Summer for the Gods
by Edward J. Larson

In the summer of 1925, the sleepy hamlet of Dayton, Tennessee, became the setting for one of the 20th century's most contentious dramas: the Scopes trial that pit William Jennings Bryan and the anti-Darwinists against a teacher named John Scope...

The Burger Court and the Rise of the Judicial Right
by Michael J. Graetz

When Richard Nixon campaigned for the presidency in 1968 he promised to change the Supreme Court. With four appointments to the court, including Warren E. Burger as the chief justice, he did just that. In 1969, the Burger Court succeeded the famousl...

In The Majesty of the Law, Supreme Court Justice Sandra Day O’Connor explores the law, her life as a Justice, and how the Court has evolved and continues to function, grow, and change as an American institution. Tracing some of the origins of ...

The legal system in America is the basis of freedom as we know it today. The system is based, ultimately, on the common law of England, but it has grown, developed, and changed over the years. American law has been a critical factor in American life...

The Challenge
by Jonathan Mahler

In November 2001 a thirty-one-year-old Yemeni man named Salim Ahmed Hamdan was captured near the Pakistani border and turned over to US forces in Afghanistan. After confessing to being Osama bin Laden’s driver, Hamdan was transferred to Guant&...