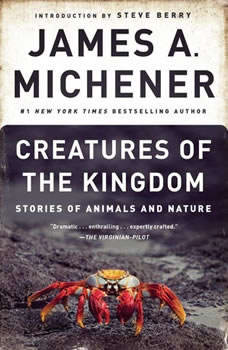 Creatures of the Kingdom: Stories of Animals and Nature

In sixteen wonderful stories, Pulitzer Prize–winning author James A. Michener burrows deep into the secret lives of animals and the hidden world of nature. Here he sheds light on nature’s most awesome and beguiling handiwork, from the sublime shaping and reshaping of earth’s lands and seas to a ridiculous armadillo’s assault on a bit of Texas real estate that paid off handsomely. Handpicked from Michener’s most popular books, these mini-masterpieces are imbued with the music of the spheres and the heartbeat of creation.

Praise for Creatures of the Kingdom

“[Creatures of the Kingdom contains] the dramatic elements of a life—the wonder of birth, rites of passage, lots of conflict, much of it physical and bloody, and death. . . . As characters in a James Michener novel, a beaver can know loneliness, a buffalo can bide his time, a salmon can feel encouraged, and a woolly mammoth can ‘luxuriate’ in the ecological rewards of a plains fire.”—Boston Sunday Herald

“Dramatic . . . enthralling . . . expertly crafted . . . Michener treats each of these creatures with fundamental respect, and in many cases, admiration and awe, if not outright love.”—The Virginian-Pilot

“Anyone who has read a James Michener novel knows that it’s a learning experience as well as an adventure.”—The Sacramento Bee

“Delightful . . . nature writing at its most fluid and involving.”—Booklist