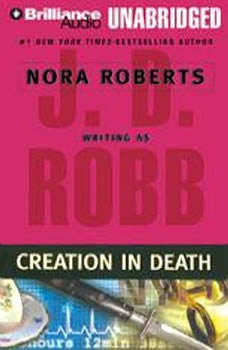 Eve has seen this crime scene before: the artfully arranged body of a young brunette, arms spread, palms up, body marked by the signs of prolonged and painful torture. Carved into her torso is the time it took her to die - in hours, minutes, and seconds. And on the third finger of her left hand has been placed a silver ring. Eve is catapulted back to a case nine years earlier, when a man whom the media tagged “The Groom” put the city on edge with a killing spree that took the lives of four women in fifteen days. Eve and her partner Feeney, her friend and mentor, couldn’t stop him before he disappeared, only to resurface in other parts of the world to kill and kill again. But now The Groom seems to have come back to where he started. When it turns out that The Groom’s most recent victim was employed by Eve’s billionaire husband, Roarke, she brings him onto the case. A move that proves fitting when it becomes chillingly clear that the killer has made it personal. The corpse was washed in products from a store Roarke owns and laid out on a sheet his company manufactures. With the Groom’s monstrous return, Eve is determined to finish him once and for all. Familiar with his methods, she knows that he has already grabbed his next victim. But his sights are set on the biggest challenge of his illustrious career - an abduction that will test his skills and that promises to give him satisfaction as he’s never known. Time is running out on another woman’s life…and for Eve.

Boonsboro, Maryland resident famous author, Nora Roberts has been writing suspense novels very successfully, under the pseudonym of J. D. Robb since 1995. Her first In Death series book was Naked in Death, to which readers were immediately attracted to the main characterâ€¦Eve Dallas, and her love interestâ€¦Roarke.

This is not a true synopsis of the story because that can be found elsewhere. The best part of this audio book was Susan Eriksen's narration. Though I did think Detective Delia Peabody sounded like Velma and Detective Ian McNabb sounded like Shaggy from Scooby Doo. LOL! I thought the female lead Lt. Eve Dallas seemed like a character from a video game. Upon checking the JD Robb website it says she was abused and repeatedly molested by her father, a seasoned criminal, and her apathetic mother was a drug addict and prostitute. At age eight, Eve was found in an alley in Dallas, Texas, covered in blood and with no memory of who she was or what happened. She was given the name Eve and put into foster care. Eve’s foster mother was no saint in the ten years that she had Eve under her roof. This would explain why she acts more like a man than a woman. The macho behavior of Eve Dallas is extreme. She's antisocial, rude but extremely compassionate for victims and their families. Eve's husband Roarke is Irish and the richest man in the world. With the exception of sex scenes, very tame, Robb writes Roarke more as Eve's mother than as Eve's husband. Roarke thinks Eve's perfect in deed and thought, puts her to bed and feeds her. Disagreements between spouses do not further the story and one wonders why they are written at all. Why would Eve care if the richest man in the world buys the NYPSD task force lunch? Can anyone do their best work with no sleep, cup after cup of coffee, no food, and energy pills? I'm always amazed at how characters in books can go for days without eating or sleeping. The serial killer isn't interesting. Not how he kills, not why he kills, nor how he chooses his vitims, nothing. It's the future and the serial killer and everything about him is from the past. It's a very Nazi story line. Boring! The AutoChef is a combo microwave coffee maker. Ms. Roberts/Robb really has to get her imagination going in her future world. The author didn't make this reader care about the characters including the serial killers victims. I don't feel compelled to ever read another story about Eve Dallas. A huge amount of the audio book, 10 cd's, was spent on what the task force was going to do to find the serial killer. Or what they had done towards finding the serial killer and if it did or didn't help them. TMI. Maybe the book had to be a certain amount of words? By the time Eve Dallas found the serial killer I was saying please hurry up already. It was anticlimactic, I thought the author could redeem her self with a great ending. Most people don't know anything about police work so I won't mention anything. Maybe Ms. Roberts/Robb's earlier books are better. Just don't expect too much from this book. My recommendation is Patricia Cornwell or Patricia D. Cornwell depending on where you are searching.

Creation in Death
In Death Series #25