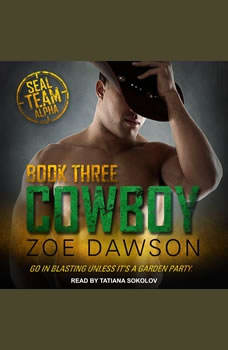 U.S. Navy SEAL Wes "Cowboy" McGraw goes home on leave to attend his tenth high school reunion. This brings him back into the orbit of a woman he knew in high school: Kia Silverbrook, renowned for her hacking ability. She's always intrigued him and when they meet again by chance, the chemistry is still there as strong as ever. But Galveston isn't home anymore since Wes lost the ranch after his father's shocking death. He's been saving up to buy it back, but he's not sure he can go home again, especially now that he's been pledged to the SEALs. He's only home for a short period and long-distance relationships didn't pan out for him in the long run. Cowboy has fantasized about this woman for years, the girl who was and is still worlds apart, one he'd never taken a chance on. Hacker extraordinaire Kia has been making a sweet living doing some legal and not so legal hacking. But when a break-in makes her believe that a secret investigation she has been conducting may be blowing back at her, she doesn't know where to turn. Except to Wes, the boy who had always intrigued her in high school with his cowboy charm and those ever-watchful, hot whiskey eyes. He was so far out of her league with her Goth dress and her pierced body. She has possible evidence that will knock Cowboy's world off its axis, but now she needs Wes's help. If this big, bad, gorgeous SEAL couldn't keep her safe, she'd eat her computer. Could this man even look at her twice once the danger is over? Contains mature themes.