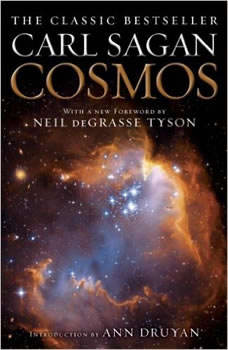 Cosmos is one of the bestselling science books of all time. In clear-eyed prose, Sagan reveals a jewel-like blue world inhabited by a life form that is just beginning to discover its own identity and to venture into the vast ocean of space. Featuring a new Introduction by Sagan’s collaborator, Ann Druyan, and a new Foreword by astrophysicist Neil deGrasse Tyson, Cosmos retraces the fourteen billion years of cosmic evolution that have transformed matter into consciousness, exploring such topics as the origin of life, the human brain, Egyptian hieroglyphics, spacecraft missions, the death of the Sun, the evolution of galaxies, and the forces and individuals who helped to shape modern science.Includes introductory music: Heaven and Hell by Vangelis from Cosmos: A Personal Voyage used with permission from Druyan-Sagan Associates, Inc. All rights reserved.

The Grand Design
by Stephen Hawking

THE FIRST MAJOR WORK IN NEARLY A DECADE BY ONE OF THE WORLD’S GREAT THINKERS—A MARVELOUSLY CONCISE BOOK WITH NEW ANSWERS TO THE ULTIMATE QUESTIONS OF LIFE When and how did the universe begin? Why are we here? Why is there something ...

The world-famous cosmologist and #1 bestselling author of A Brief History of Time leaves us with his final thoughts on the biggest questions facing humankind. Stephen Hawking was the most renowned scientist since Einstein, known both for his groundb...

The Greatest Story Ever Told . . . So Far
by Lawrence M. Krauss

Internationally renowned, award-winning theoretical physicist, New York Times bestselling author of A Universe from Nothing, and passionate advocate for reason, Lawrence Krauss tells the dramatic story of the discovery of the hidden world of reality...

Our Mathematical Universe
by Max Tegmark

Max Tegmark leads us on an astonishing journey through past, present and future, and through the physics, astronomy and mathematics that are the foundation of his work, most particularly his hypothesis that our physical reality is a mathematical str...

You Are the Universe
by Deepak Chopra, M.D.

Now a New York Times Bestseller!  "A riveting and absolutely fascinating adventure that will blow your mind wide open!" —Dr. Rudolph E. TanziDeepak Chopra joins forces with leading physicist Menas Kafatos to explore some of the most ...

The Fabric of the Cosmos
by Brian Greene

From Brian Greene, one of the world’s leading physicists, comes a grand tour of the universe that makes us look at reality in a completely different way.Space and time form the very fabric of the cosmos. Yet they remain among the most mysteri...

The Universe in a Nutshell
by Stephen Hawking

Stephen Hawking’s phenomenal, multimillion-copy bestseller, A Brief History of Time, introduced the ideas of this brilliant theoretical physicist to readers all over the world. Now, in a major publishing event, Hawking returns with a lavishly ...