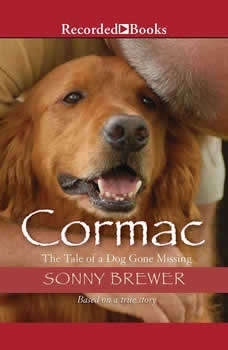 Cormac is a novel based on real events, and tells the tale of a Golden Retriever, who ran away from his Alabama home while the owner was on a book tour in San Francisco. Cormac had always been afraid of storms, they made him cower and tremble. Or, in this case, run, run like the shrieking wind that blew the rain across the land. Maybe if Cormac s master had not been away from home, and his food and water poured for him by a stranger s hand, things would have been different. But on that day the young male dog took off into an adventure that would land him in the bed of a red pickup truck, driven by a mysterious woman who would hand him over to the dog pound, and the dog pound would hand him over to a rescue group who would take him to a clinic to be fixed by a routine scalpel and end his royal lineage. Cormac would be hauled to Connecticut in the back of a van, and turned over to another rescue group that would offer him for adoption on the internet. These things are known because Cormac s owner, Sonny Brewer, the author of this book, went door to door in his neighborhood gathering one clue and then another, one bit of information and then another. When the trail led him to the dog pound and the director there refused to disclose information to Sonny, a Pulitzer prize-winning journalist friend promised the story would make national news in 48 hours unless Sonny was told everything he wanted to know. Doors and phone lines then opened and Sonny attempted to determine if the Golden Retriever the foster family called Cognac was in fact Cormac. Sonny felt 90 percent certain it was his dog and agreed to take him, paying a pet transport driver $300 to bring the Golden south to Alabama.