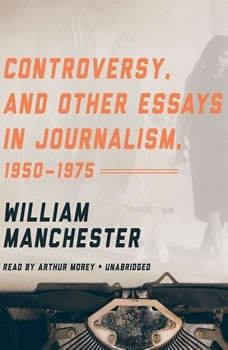 The writing of Death of a President, William Manchesters award-winning account of President Kennedys assassination, is the topic of the title essay in this collection, as it was a controversy like few others, pitting one of the most prominent historians of the day against Jackie Kennedy, the most famous, and private, widow in the world. The seventy-six page essay provides an insiders account of the struggle to see the book published. The rest of this sweeping collection examines the time period between World War II and the Vietnam era. It is an account that is both exactingly accurate and a pleasure to hear.

At the end of 1618, a blazing green star soared across the night sky over the northern hemisphere. From the Philippines to the Arctic, the comet became a sensation and a symbol, a warning of doom or a promise of salvation. Two years later, as the Pi...

New York Times bestselling author Hampton Sides returns with a white-knuckle tale of polar exploration and survival in the Gilded AgeIn the late nineteenth century, people were obsessed by one of the last unmapped areas of the globe: the North ...

Acclaimed author of biographical and historical fiction Irving Stone turns his magnificent talent to telling Americas most colorful and exciting storythe opening of the Far West.Men to Match My Mountains is a true historical masterpiece, an unforget...

A Distant Mirror
by Barbara Tuchman

The Bubonic Plague of the 14th century killed one third of all human beings in Europe and Western Asia; many who survived the plague killed each other in the Hundred Years War that followed. What was it like to live in this calamitous century, when ...

A social history of cheating and how American history -- through real estate, sports, finance, academics, and of course politics -- has had its unfair share of rigged results and widened the margins on its gray areas.Drawing from the intriguing (an...

Unabridged, 15 hoursRead by TBDA mesmerizing, new account of the great explorer from the acclaimed biographer of Magellan and Marco Polo.

Fern Cave likes to keep its secrets. It features over 15 miles of passage, a 437-foot-deep pit, and 18 distinct levels. Fern Cave is a complex three-dimensional maze of deep pits, sinuous interwoven canyons, massive rooms, and stream passages that w...

The Glory and the Dream
by William Manchester

Atlas of a Lost World
by Craig Childs

From the author of Apocalyptic Planet comes a vivid travelogue through prehistory, that traces the arrival of the first people in North America at least twenty thousand years ago and the artifacts that tell of their lives and fates.In Atlas of a Los...