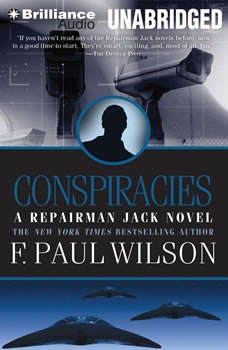 Repairman Jack, F. Paul Wilson’s vigilante hero first seen in the New York Times bestseller The Tomb, returns in a thriller that thrusts Jack back into the weird, supernatural world that he thrives in. Looking for clues to the mysterious disappearance of leading conspiracy theorist Melanie Ehler, Jack attends a convention of bizarre and avid conspiracy theorists. It’s a place where aliens are real, the government is out to get you, and the world is hurtling toward an inevitable war of good versus evil incarnate. Jack &#64257;nds that nobody can be trusted — and that few people are what they seem. Worse yet, Jack’s been having vivid dreams that make him wonder whether he’s headed for a clash with his own past — maybe The Tomb’s evil rakoshi beasts aren’t through with him quite yet. “The Tomb is one of the best all-out adventure stories I’ve read in years.” — Stephen King (president of the Repairman Jack fan club)