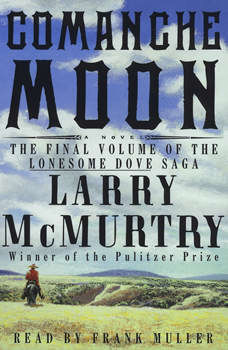 A brilliant and haunting novel richly capable of standing on its own. Comanche Moon completes Larry McMurtry's epic cycle of novels of the American West that began with the Pulitzer-Prize-winning masterpiece, Lonesome Dove.We join Texas Rangers August McCrae and Woodrow F. Call as they are just beginning to deal with the perplexing tensions of adult life -- Gus, and his great love, Clara Forsythe, Call and Maggie Tilton, the young whore who loves him -- when they enlist with a Ranger troop in pursuit of Buffalo Hump, the great Comanche war chief; Kicking Wolf, the celebrated Comanche horse thief; and a deadly Mexican bandit king with a penchant for torture.Comanche Moon joins the twenty-year time line between Dead Man's Walk and Lonesome Dove, as we follow Gus, Call and their comrades-in-arms -- Deets, Jake Spoon, and Pea Eye Parker -- in their bitter struggle to protect an advancing Western frontier against the defiant Comanches, determined to defend their territory and way of life.At once realistic and yet vividly imagined, Comanche Moon is a giant of an audiobook and the keystone to a mighty achievement of storytelling. An epic adventure full of heroism, tragedy, cruelty, courage, honor and betrayal, Comanche Moon is the culmination of Larry McMurtry's peerless vision of the American West.

In Streets of Laredo, McMurtry brought the story ahead, giving us Call in his old age. Now, in Dead Man's Walk, he takes us back to the days when Gus and Call were young Texas Rangers, first experiencing the wild frontier that will form their charac...

This is one of my favorite books. I couldn't put it down. Very graphic! Great story.

Just as all of McMurtry's books, this is another great one!!