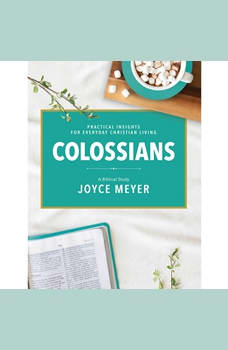 Let the wisdom of Colossians transform relationships in every area of your life -- home, church, and even the world -- with this study guide from renowned Bible teacher Joyce Meyer.Paul's letter to the Colossians reminds us that as we have died with Christ, so, too, do we need to die to our sins. It encourages us that because we have also been raised in Him, we must submit to Jesus and adopt qualities motivated by Christian love. In this comprehensive study tool, Joyce Meyer's commentary on Colossians affirms the Lordship of Christ and offers practical advice on family, relationships, and faith.

Your Battles Belong to the Lord
by Joyce Meyer

Do It Afraid
by Joyce Meyer

The New Testament in Its World: Audio...
by N. T. Wright

The Gospel According to Paul
by John F. MacArthur