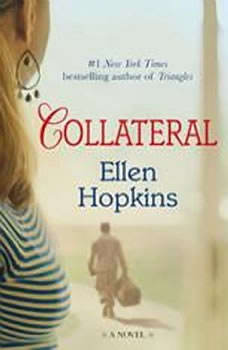 From the sensational writer of the young adult classics Tilt, Crank, and Perfect—and the New York Times bestselling author of the adult novel Triangles—the gripping story of a woman torn between love for her boyfriend, a dedicated Marine deployed to Afghanistan, and the resentment she has for the war that is tearing their lives apart.Written in Hopkins’s stunning poetic verse style, Collateral centers on Ashley, an MFA student at San Diego State University. She grew up reading books and never dreamed she would become a military wife. One night she meets a handsome soldier named Cole. He doesn’t match the stereotype of the aggressive military man. He’s passionate and romantic. He even writes poetry. Their relationship evolves into a sexually charged love affair that goes on for five years and survives four deployments. Cole wants Ashley to marry him, but when she meets another man, a professor with similar pursuits and values, she begins to see what life might be like outside the shadow of war.     Collateral captures the hearts of the soldiers on the battlefield and the minds of the friends, family, and lovers they leave behind. Those who remain at home may be far away from the relentless, sand-choked skies of the Middle East and the crosshairs of a sniper rifle, but just the same, all of them will sacrifice a part of themselves for their country and all will eventually ask themselves if the collateral damage caused by war is worth the fight.