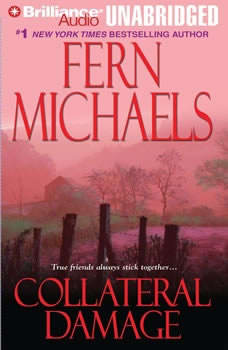 Through all their adventures, the bond of the Sisterhood has remained steadfast and unshakeable. But for the first time, the Sisterhood verges on falling apart when the ladies have to choose between two difficult assignments. The first job guarantees a huge paycheck; the second offers a presidential pardon — and a chance to finally emerge from hiding. For the sake of their union, the gals put aside their differences and focus on a new mission. A mysterious Washington, D.C. political operative needs them to track down a computer hacker who has stolen a highly classified list of fundraisers’ names. With a presidential election looming, the girls soon realize the job is a lot more dangerous than they had anticipated. Will their client come through with his promise? And can the ladies stop fighting — and stay alive — long enough to see it happen? Praise for Fern Michaels and her Sisterhood novels: “Revenge is a dish best served with cloth napkins and floral centerpieces…fast-paced…puts poetic justice first.” — Publishers Weekly on Payback “An unforgettable story.” — Rendezvous on Weekend Warriors

The loyal friends who make up the Sisterhood have gathered at Myra Rutledge’s beautiful Virginia home for the first time in a year, eager to talk, laugh, and share their joys and heartaches. For one of their number, it’s an evening fille...

Opening night at New York's New Globe Theater turns from stage scene to crime scene when the leading man is stabbed to death center stage. Now Eve Dallas has a high profile, celebrity homicide on her hands. Not only is she lead detective, she's also...

It’s been years since the members of the Sisterhood first banded together, with the help of their mentor Charles Martin, to exact their own form of justice on those whose crimes had gone unpunished by the legal system. Now, back in the United ...

When club-hopping bad girl Tiara Kent is found dead in her plush Manhattan apartment, the killing has all the earmarks of a vampire attack. The ever-practical Lieutenant Eve Dallas has to deal with superstitious cops carrying garlic and stakes, as w...

In an uptown strip joint, a cop is found bludgeoned to death. The weapon’s a baseball bat. The motive’s a mystery. It’s a case of serious overkill that pushes Eve Dallas straight into overdrive. Her investigation uncovers a private...