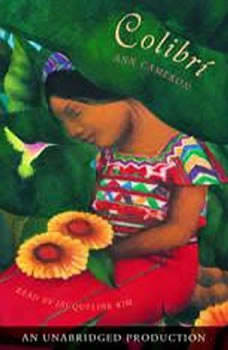 She was little and quick and pretty. Her mother nicknamed her Colibrí, Spanish for "Hummingbird." At age four she was kidnapped, torn from her parents on a crowded bus in Guatemala City. Since then she's traveled with "Uncle," the ex-soldier and wandering beggar who has renamed her Rosa. Uncle has always told Rosa that he searched for her parents but had no success. There's almost no chance Rosa will ever find them--but Rosa still remembers and longs for them.When she was young, Uncle consulted fortune-tellers who told him that Rosa would bring him luck--a treasure big enough to last him all his life. So he's kept her with him. Together, they have traveled from town to town in the highlands of Guatemala, scraping out a living, hoping to find the treasure. Eight years have passed, and Rosa has turned twelve. No treasure has been found, and Uncle has almost given up hope. When he turns angry and desperate, danger threatens Rosa from all sides--but especially from Uncle himself.From the Cassette edition.