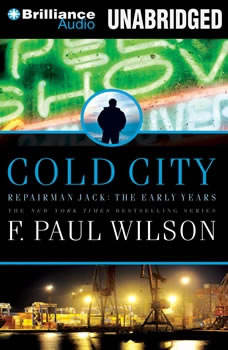 If you’ve never read a Repairman Jack novel, this is the place to begin. It’s 1990. A twenty-one-year-old named Jack has dropped out of college, leaving his old life behind to build a new one in New York City. Manhattan’s rough edges are jagged enough to shred any unwary newcomer, but perhaps not one who is determined to stay off the grid, at any cost, in the busiest metropolis on earth. And to do so, he’ll have to take jobs of a less than legal nature. An interstate smuggling operation seems to fit the bill perfectly. But Jack’s initial foray into the trafficking of illicit goods carries greater risk than he bargained for, putting him afoul of a preteen slavery ring, a group of jihadists, and a pair of vigilante brothers. As if those problems weren’t enough, Jack is hunted by some machete-wielding maniacs, and his bartender Julio is harassed by the mob. How these things are linked, and what they have to do with the murder of Rabbi Meir Kahane in Manhattan’s East Side Marriott, is a mystery Jack cannot let go of. Cold City is the first of three new novels revealing the early years of one of the most popular characters in contemporary fiction: a self-styled “fix-it” man who is no stranger to the macabre or the bizarre, hired by victimized people who have nowhere else to turn. This is where he begins the metamorphosis from a naïve New Jersey refugee into the urban mercenary known as Repairman Jack.