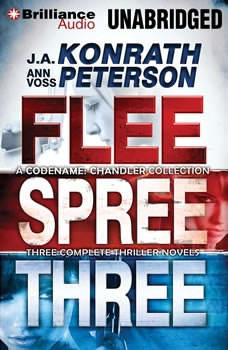 This is a special edition of the first three novels in the Codename: Chandler series.FleeChandler isn’t a person; it’s the codename for a woman who was shaped from a raw military recruit into a living weapon. She’s an assassin without remorse or fear, doing the bidding of an agency so secret that only three people know of its existence. But when her cover gets blown, she becomes the target of a wide-reaching conspiracy led by a mysterious figure whose connection to Chandler goes far beyond what she could have imagined.Now she faces an explosive twenty-four hours—a single day in which everyone she encounters seems hell-bent on ending her life. With any past ally suddenly a possible traitor and every present emotion a weakness for her enemies to exploit, Chandler must tap into her deepest reservoirs of strength and skill in order to survive. But her survival is just the beginning as she confronts a murderous lunatic with a personal agenda, a squad of assassins just as skilled as she is, and a diabolical plot to unleash nuclear holocaust across the globe.SpreeSuper spy and assassin Chandler has just barely averted nuclear annihilation when the very organization she works for has her brought in on treason charges, trussed up for interrogation. After a run-in with Chicago Homicide cop Jack Daniels, Chandler discovers one of her sisters, Fleming, has been transferred to a black ops site where the modus operandi is torture and death.Chandler launches a breakneck mission to infiltrate an impossibly secure prison—putting her on a collision course with a squad of violent psychopaths trained to negate her precise skill set. As old enemies reemerge and new ones appear around every corner, Chandler will rely on the help of unexpected allies, including an ex-mob enforcer named Tequila and a firefighter named Lund. But even they may not be enough to stop what lurks within the unlisted military base: a rogue government agency plotting to destabilize the entire nation—and conquer the world.ThreeTime is running out for Chandler, the elite assassin whose mission to rescue her sister from a notorious black ops prison landed her at the top of the nation’s Most Wanted list. Burned by her handlers and forced to work with her mortal enemy in a race to preserve the very government that wants her dead, the living weapon has become a ticking time bomb.In saving her sister, Chandler unleashed a power-mad American president dead set on controlling the world—no matter how many millions of innocent people he must kill to do it. To stop him, Chandler will go deeper than she’s ever gone before, pushing her body and mind to their absolute limits. All the while she is hunted by the one man who knows her every secret, her every hiding place—and her every weakness. Infiltrating the White House, crashing a bullfight in Mexico City, hijacking a blimp in Toronto…these are just the beginning of the end, as theCodename: Chandler Trilogy races towards its stunning conclusion.