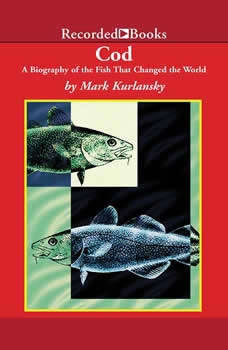 Cod: A Biography of the Fish That Changed the World

Author Mark Kurlansky pleasantly surprised the world with this engaging best-seller that garnered rave reviews from critics and casual readers alike. His subject for this whimsical biography is the codfish, a species remarkable for its influence on humanity. Cod, Kurlansky argues, has driven economic, political, cultural and military thinking for centuries in the lands surrounding the Atlantic Ocean. Nations like England and Germany have waged wars for cod. Vikings survived on frozen cod during their expeditions to the present America. And, it turns out, European explorers were driven toward North America in pursuit of this humble fish. Kurlansky fills this biography with fascinating anecdotes that show cod surfacing time and again throughout history. The book also serves as a wake-up call, alerting us that the species has nearly been fished out. Richard M. Davidson delivers a reading that is often amusing and always enlightening.

Much Depends on Dinner
by Margaret Visser

Best-selling author Margaret Visser holds a doctorate in classics and appears frequently on television and radio shows. Much Depends on Dinner was chosen as one of the best books of the year by The New York Times Book Review and Publisher's Weekly. ...

Patrick E. McGovern takes us on a fascinating journey through time to the dawn of brewing when our ancestors might well have made a Palaeo-Brew of wild fruits, honey, cereals, and botanicals. Early beverage-makers must have marveled at the magical p...

Inside what life is really like for the new generation of professional cooks—a captivating tale of the make-or-break first year at a young chef’s new restaurant.   For many young people, being a chef is as compelling a dream as bein...

The Taste of Empire
by Lizzie Collingham

In The Taste of Empire, acclaimed historian Lizzie Collingham tells the story of how the British Empire's quest for food shaped the modern world. Told through twenty meals over the course of 450 years, from the Far East to the New World, Collingham ...

For generations, people have proudly defined themselves and their values through their national cuisine. But American food, like its history, is a world of its own. This enticingly fresh book introduces modern listeners to lost American food traditi...

A Washington Post Notable Nonfiction Book of 2017One of NPR Fresh Air's "Books to Close Out a Chaotic 2017"NPR's Book Concierge Guide To 2017’s Great Reads“How lucky for us readers that Shapiro has been listening so percep...

What Einstein Told His Cook
by Robert L. Wolke

Why is red meat red? How do they decaffeinate coffee? Do you wish you understood the science of food but don't want to plow through dry, technical books? In What Einstein Told His Cook, University of Pittsburgh chemistry professor emeritus and awa...

A Square Meal
by Andrew Coe

The decade-long Great Depression, a period of shifts in the country's political and social landscape, forever changed the way America eats. Before 1929, America's relationship with food was defined by abundance. But the collapse of the economy, in b...

The French Chef in America
by Alex Prud'homme

The enchanting story of Julia Child's years as TV personality and beloved cookbook author--a sequel in spirit to My Life in France--by her great-nephew Julia Child is synonymous with French cooking, but her legacy runs much deeper. Now, her great-ne...