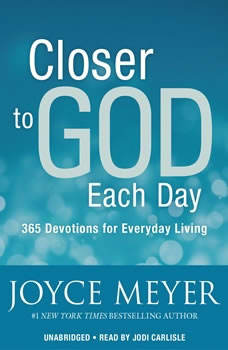 Closer to God Each Day: 365 Devotions for Everyday Living

In this 365-Day devotional, Joyce Meyer, #1 New York Times bestselling author, helps readers achieve a more confident, joyful life by growing closer in their relationship with God. Everyday life can be demanding; it's easy to become distracted by so many things that seem important. But in order to lead a fulfilling life, you have to make time daily for what's most important--your relationship with God. In CLOSER TO GOD EACH DAY, Joyce Meyer, #1 New York Times bestselling author, outlines practicals ways to develop your intimacy with God. Joyce shares powerful Scripture and personal illustrations that will help you experience the peace that is gained through closeness with Him. You'll be inspired each day to make better decisions, live more effectively, and lead the joyful life God has planned for you.