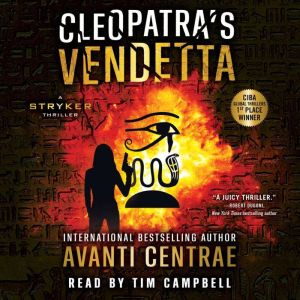 Royal secrets. Epic lies. This "dangerous" and controversial standalone thriller from international bestselling VanOps author Avanti Centrae is a fast-paced bombshell of a story about truth and courage.

Born a goddess, Cleopatra died a prisoner. But the cobra's deadly kiss was just the beginning...

Bari, Italy, present day. Think tank Special Ops leader Timothy Stryker and his wife Angie, a self-made CEO, haven’t exactly been seeing eye-to-eye. They take a much-needed Italian holiday, but it comes to a shocking end when Angie and their daughter are kidnapped.

Still raw from the death of their infant son, Stryker is desperate to rescue Angie and reconcile their differences. As he works to locate the captors’ lair, he discovers the kidnappers are behind a string of recent assassinations and attempting another high-profile hit in only seven days. But when he learns their plans for his only remaining child, the scab on his heart tears open and blood begins to spill.

Working from inside her brutal captors’ high-security compound, Angie realizes the cabal is hiding an ancient secret using modern propaganda techniques. And as Stryker races hitmen across India, Egypt, and Greece to thwart the next assassination and save his family, he has to connect a series of deadly dots tracing all the way back to the time of Cleopatra. Ultimately, the estranged pair must shake the deeply buried pillars of western civilization to save their four-year-old daughter from an unspeakable fate.

Cleopatra's Vendetta is a sizzling novel that paints a disturbing picture of some of the most intricate issues that have plagued humanity’s past…challenges that color our days and provide the blueprint for our future.