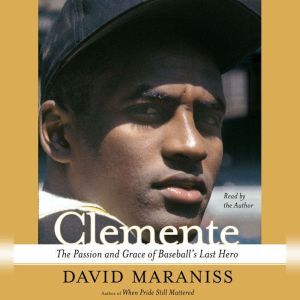 Clemente: The Passion and Grace of Baseball's Last Hero

On New Year's Eve 1972, following eighteen magnificent seasons in the major leagues, Roberto Clemente died a hero's death, killed in a plane crash as he attempted to deliver food and medical supplies to Nicaragua after a devastating earthquake. David Maraniss now brings the great baseball player brilliantly back to life in Clemente: The Passion and Grace of Baseball's Last Hero. Maraniss offers thrilling accounts of Clemente's underdog Pirates' two World Series victories, but Clemente is for more than just another baseball book. Roberto Clemente was a work of art in a game too often defined by statistics. He was also that rare athlete who rose above sports to become a symbol of larger themes, the Jackie Robinson of the Spanish-speaking world, who paved the way for waves of Latino players who followed in later generations. The Clemente that Maraniss evokes was a ballplayer of determination, grace, and dignity who insisted that his responsibilities extended beyond the playing field. With narrative sweep and meticulous detail, Clemente captures the myth and the real man, and retraces his final days, using newly uncovered documents to reveal the corruption and negligence that led the unwitting hero on a mission of mercy toward his untimely death.