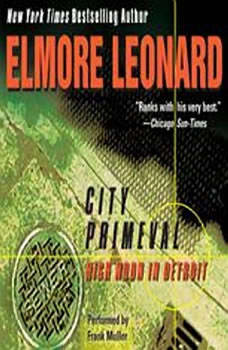 “As gritty and hard-driving a thriller as you’ll find….The action never stops, the language sings and stings.” —Washington PostThe City Primeval in Elmore Leonard’s relentlessly gripping classic noir is Detroit, the author’s much-maligned hometown and the setting for many of the Grand Master’s acclaimed crime novels. The “Alexander the Great of crime fiction” (Pittsburgh Post-Gazette) shines in these urban mean streets, setting up a downtown showdown between the psychopathic, thrill-killing “Oklahoma Wildman” and the dedicated city copy who’s determined to take him down. The creator of U.S. Marshal Raylan Givens of TV’s Justified fame, Elmore Leonard is the equal of any writer who has ever captivated readers with dark tales of heists, hijacks, double-crosses, and murder—John D. MacDonald, Dashiell Hammett, James M. Cain, and Robert Parker included—and nobody then or now is better.

“Cat Chaser is just what one would expect from Elmore Leonard—quirky, peopled with oddball characters…and more twists and turns than a roller coaster.”—Cleveland Plain Dealer“A superior example of gritty writing a...