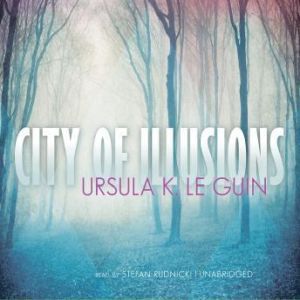 He is a fullgrown man, alone in dense forest, with no trail to show where he has come from and no memory to tell who or what he is. His eyes are not the eyes of a human. The forest people take him in and raise him almost as a child, teaching him to speak, training him in forest lore, giving him all the knowledge they have. But they could not solve the riddle of his past, and at last he has to set out on a perilous quest to find his true selfand a universe of danger.

This audiobook doesn't exist. Even Amazon doesn't have it, nor do any of the used book vendors in Amazon's network. After it was my first choice on my BooksFree list for over a half year I gave up and read the old hardcover version. The three stories the last two of which are more closely related to each other than the first one share themes with LeGuin's later work, but aren't as well crafted. Why BooksFree continues to list the availablity of this audiobook as Medium is a mystery to me. You will not find this audiobook on Earth.