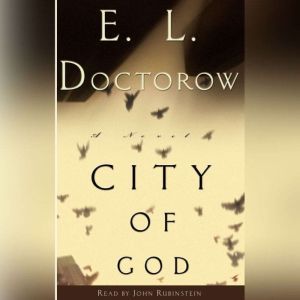 With brilliant and audacious strokes, E. L. Doctorow creates a breathtaking collage of memories, events, visions, and provocative thought, all centered on an idea of the modern reality of God. At the heart of this stylistically daring tour de force is a detective story about a cross that vanishes from a rundown Episcopal church in lower Manhattan only to reappear on the roof of an Upper West Side synagogue. Intrigued by the mystery—and by the maverick rector and the young rabbi investigating the strange act of desecration—is a well-known novelist, whose capacious brain is a virtual repository for the ideas and disasters of the age.

Daringly poised at the junction of the sacred and the profane, filled with the sights and sounds of New York, and encompassing a large cast of vividly drawn characters including theologians, scientists, Holocaust survivors, and war veterans, City of God is a monumental work of spiritual reflection, philosophy, and history by America’s preeminent novelist and chronicler of our time.

Praise for City of God

“A grander perspective on the universe . . . a novel that sets its sights on God.”—The Wall Street Journal

“Dazzling . . . The true miracle of City of God is the way its disparate parts fuse into a consistently enthralling and suspenseful whole.”—Time

“Blooms with humor, and a humanity that carries triumphant as intelligent a novel as one might hope to find these days.”—Los Angeles Times

“One of the greatest American novels of the past fifty years . . . Reading City of God restores one’s faith in literature.”—The Houston Chronicle