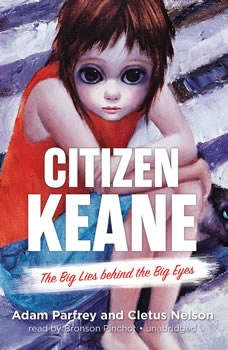 Citizen Keane: The Big Lies behind the Big Eyes

Teary, big-eyed orphans and a multitude of trashy knockoffs epitomized American kitsch art as they clogged thrift stores for decades. When Adam Parfrey tracked down Walter Keanethe credited artist of the weepy waifsfor a San Diego Reader cover story in 1992, he discovered some shocking facts. Decades of lawsuits and countersuits revealed the reality that Keane was more of a con man than an artist, and that he forced his wife Margaret to sign his name to her own paintings. As a result, those weepy waifs may not have been as capricious an invention as they seemed. Parfreys story was reprinted in Juxtapoz magazine and inspired a Margaret Keane exhibition at the Laguna Art Museum. Director Tim Burton made a movie about the Keanes called Big Eyes, which came out in 2014. Citizen Keane is a book-length expansion of Parfreys original article, providing fascinating biographical and sociological details.