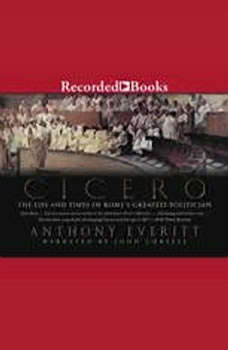 Cicero: The Life and Times of Rome's Greatest Politician

John Adams said of Cicero, All ages of the world have not produced a greater statesman and philosopher combined. Voltaire said of Cicero, He taught us how to think. And yet Anthony Everitts authoritative yet accessible work is the first one-volume biography of the Roman statesman in over 25 years. He squared off against Caesar and was friends with young Brutus. He advised the legendary Pompey on his somewhat botched transition from military hero to politician. He lambasted Mark Antony and was master of the smear campaign, as feared for his wit as he was for exposing his opponents sexual peccadilloes. Brilliant, voluble, cranky, a genius of political manipulation but also a true patriot and idealist, Cicero was Romes most feared politician, one of the greatest lawyers and statesmen of all times. Machiavelli, Queen Elizabeth, John Adams and Winston Churchill all studied his example. No man has loomed larger in the political history of mankind. In this dynamic and engaging biography, Anthony Everitt plunges us into the fascinating, scandal-ridden world of ancient Rome in its most glorious heyday. Accessible to us through his legendary speeches but also through an unrivaled collection of unguarded letters to his close friend Atticus, Cicero comes to life in these pages as a witty and cunning political operator.