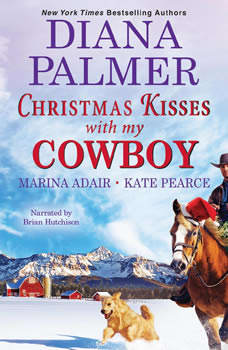 Christmas Kisses with My Cowboy

This Christmas, the best kind of trouble comes in threes: Three bestselling authors. Three stories of holiday romance. And three cowboys who are ready for lovewhether they know it yet or not . . . MISTLETOE COWBOY * Diana Palmer Horse whisperer Parker doesn't drink, smoke, or gamble, and he doesn't have much to do with women, either. Until he meets winsome widow Katy, and her sweet child. Could Christmas kisses under the mistletoe bring the handsome wrangler the gift of his very own family? BLAME IT ON THE MISTLETOE * Marina Adair To claim his slice of the family ranch, Texas Ranger Noah is forced back to Tuckers Crossing. All he expects to find is a tractor load of painful memoriesuntil a holiday storm, a power outageand perhaps the magic of Christmasdeliver him to rescue an intriguing woman named Faith. But just whos rescuing whom? MISTLETOE DETOUR * Kate Pearce When Morgan Valley rancher Ted Baker gets out his tow truck to pick up a snowbound driver, he doesnt expect to find his old school friend Veronica on the lam with her pet pigmuch less true lovejust in time for Christmas . . .