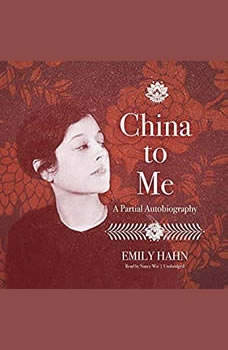 China to Me: A Partial Autobiography

A candid, rollicking literary travelogue from a pioneering New Yorker writer, an intrepid heroine who documented China in the years before World War IIDeemed scandalous at the time of its publication in 1944, Emily Hahn's now classic memoir of her years in China remains remarkable for her insights into a tumultuous period and her frankness about her personal exploits. A proud feminist and fearless traveler, she set out for China in 1935 and stayed through the early years of the Second Sino-Japanese War, wandering, carousing, living, loving-and writing.Many of the pieces in China to Me were first published as the work of a roving reporter in the New Yorker. All are shot through with riveting and humanizing detail. During her travels from Nanjing to Shanghai, Chongqing, and Hong Kong, where she lived until the Japanese invasion in 1941, Hahn embarks upon an affair with lauded Chinese poet Shao Xunmei; gets a pet gibbon and names him Mr. Mills; establishes a close bond with the women who would become the subjects of her bestselling book The Soong Sisters; battles an acquired addiction to opium; and has a child with Charles Boxer, a married British intelligence officer.In this unflinching glimpse of a vanished world, Hahn examines not so much the thorny complications of political blocs and party conflict, but the ordinary-or extraordinary-people caught up in the swells of history. At heart, China to Me is a self-portrait of a fascinating woman ahead of her time.

If you want to learn about yourself, start by exploring the world around you.   Drawing on the rich experience of his own life, best-selling author Paulo Coelho takes us back in time to relive the dreams of a generation that longed for peace an...

A page-turning novel inspired by the true-life love affair between Sigmund Freud and his sister-in-law It is fin de siècle Vienna and Minna Bernays, an overeducated lady's companion with a sharp, wry wit, is abruptly fired, yet again, from he...

Soon to be a major television event from Pascal Pictures, starring Tom Holland.Based on the true story of a forgotten hero, the USA Today and #1 Amazon Charts bestseller Beneath a Scarlet Sky is the triumphant, epic tale of one young man’s inc...

The Castle in the Forest
by Norman Mailer

A MAJOR NEW NOVEL FROM ONE OF AMERICA'S GREATEST MEN OF LETTERS No career in modern American letters is at once so brilliant, varied, and controversial as that of Norman Mailer. In a span of more than six decades, Mailer has searched into subjects...

This is Irving Stone's powerful and passionate biographical novel of Michelangelo. His time: the turbulent Renaissance, the years of poisoning princes, warring popes, the all-powerful Medici family, the fanatic monk Savonarola. His loves: the frail ...

The Castle in the Forest
by Norman Mailer

A MAJOR NEW NOVEL FROM ONE OF AMERICA'S GREATEST MEN OF LETTERS No career in modern American letters is at once so brilliant, varied, and controversial as that of Norman Mailer. In a span of more than six decades, Mailer has searched into subjects...

An extraordinary novel that brings into vivid focus the larger-than-life King Henry VIII, monarch of prodigious appetites for wine, women, and song. This is a readable, entertaining, tour de force that captures the essence of the Sixteenth Century, ...

Victory at Yorktown
by Newt Gingrich

New York Times bestselling authors Newt Gingrich's and William R. Forstchen's George Washington series continues-a novel about faith, leadership, and the triumph of the American causeIt is 1781, and Washington and his army have spent three years in ...

I have been standing on the side of life, watching it float by. I want to swim in the river. I want to feel the current.So writes Mamah Borthwick Cheney in her diary as she struggles to justify her clandestine love affair with Frank Lloyd Wright. Fo...