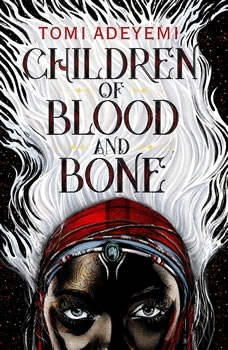 Children of Blood and Bone

*Winner of the 2019 Audie Award for Audiobook of the year**This program is narrated by acclaimed reader Bahni Turpin, whose past work includes The Hate U Give and The Underground Railroad*"Bahni Turpin's breathtaking narration of this exhilarating novel will keep listeners rooted to their seats, listening intently...an audiobook not to be missed." — AudioFile Magazine, Earphones Award winnerIn Children of Blood and Bone, Tomi Adeyemi conjures a stunning world of dark magic and danger in her West African-inspired fantasy debut.They killed my mother.They took our magic.They tried to bury us.Now we rise.Zelie Adebola remembers when the soil of Orisha hummed with magic. Burners ignited flames, Tiders beckoned waves, and Zelie’s Reaper mother summoned forth souls.But everything changed the night magic disappeared. Under the orders of a ruthless king, maji were killed, leaving Zelie without a mother and her people without hope.Now Zelie has one chance to bring back magic and strike against the monarchy. With the help of a rogue princess, Zelie must outwit and outrun the crown prince, who is hell-bent on eradicating magic for good. Danger lurks in Orisha, where snow leoponaires prowl and vengeful spirits wait in the waters. Yet the greatest danger may be Zelie herself as she struggles to control her powers—and her growing feelings for an enemy.Praise for Children of Blood and Bone:"[Narrator Bahni Turpin] excels at customizing her voice to capture the unique personalities of each character...This excellent, refreshing performance of Adeyemi's exciting debut is recommended for all collections where fantasy is popular" — Booklist, Starred Review“One of the biggest young adult fiction debut book deals of the year. Aside from a compelling plot and a strong-willed heroine as the protagonist, the book deals with larger themes, like race and power, that are being discussed in real time.”—Teen Vogue