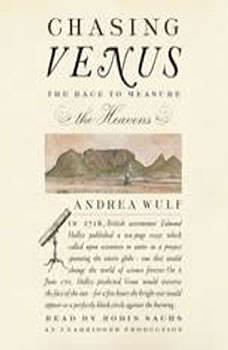 Chasing Venus: The Race to Measure the Heavens

The author of the highly acclaimed Founding Gardeners now gives us an enlightening chronicle of the first truly international scientific endeavor—the eighteenth-century quest to observe the transit of Venus and measure the solar system.
On June 6, 1761, the world paused to observe a momentous occasion: the first transit of Venus between the earth and the sun in more than a century. Through that observation, astronomers could calculate the size of the solar system—but only if they could compile data from many different points of the globe, all recorded during the short period of the transit. Overcoming incredible odds and political strife, astronomers from Britain, France, Russia, Germany, Sweden, and the American colonies set up observatories in remote corners of the world, only to have their efforts thwarted by unpredictable weather and warring armies. Fortunately, transits of Venus occur in pairs: eight years later, the scientists would have another opportunity to succeed.
Chasing Venus brings to life the personalities of the eighteenth-century astronomers who embarked upon this complex and essential scientific venture, painting a vivid portrait of the collaborations, the rivalries, and the volatile international politics that hindered them at every turn. In the end, what they accomplished would change our conception of the universe and would forever alter the nature of scientific research.