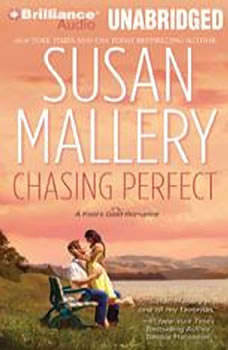 Welcome to Fool’s Gold, California, a charming community in the foothills of the Sierra Nevada. There’s lots to do and plenty of people to meet, especially women. Because there’s just one tiny problem in Fool’s Gold: the men don’t seem to stick around. Maybe it’s the lure of big-city life, or maybe it’s plain old bad luck, but regardless of the reason, the problem has to be fixed, fast. And Charity Jones may be just the city planner to do it.Charity’s nomadic childhood has left her itching to settle down, and she immediately falls in love with all the storybook town has to offer—everything, that is, except its sexiest and most famous resident, former world-class cyclist Josh Golden. With her long list of romantic disasters, she’s not about to take a chance on another bad boy, even if everyone else thinks he’s perfect just the way he is. But maybe that’s just what he needs—someone who knows the value of his flaws. Someone who knows that he’s just chasing perfect.