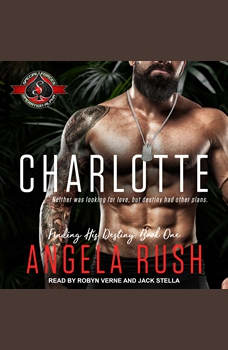 Charlotte Williams a forty-two-year-old widow is heading out for a medical mission trip to Guatemala. She meets a group of Marines at the airport prior to leaving. She hasn't even considered dating since the death of her husband, but when she meets the tall, dark, and handsome Marine, she begins to reconsider her celibacy, however she won't ever see him again, right? She doesn't even know his name. Jordan 'Hawk' Jackson is a forty-six-year-old Marine Special Ops soldier and leader of his team. He has been burned badly in his first marriage being left to raise his son on his own sixteen years ago. He had felt something was missing in his life but couldn't put his finger on it until he met a beautiful stranger in an airport cafe while traveling for a new mission. He suddenly wanted to have this woman, but he didn't even know her name. He wouldn't ever see her again anyway, right? Destiny had other plans. While raiding a suspected compound of an evil drug lord in the Colombian jungle, Hawk finds Charlotte beaten and bound lying on a jungle path, thrown out like trash. His protective instincts kick in and he is determined to keep her safe no matter the cost. Contains mature themes.