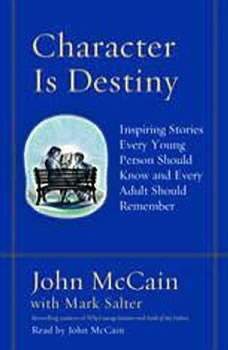 Character Is Destiny: Inspiring Stories Every Young Person Should Know and Every Adult Should Remember

In Character is Destiny, McCain tells the stories of celebrated historical figures and lesser-known heroes whose values exemplify the best of the human spirit. He illustrates these qualities with moving stories of triumph against the odds, righteousness in the face of iniquity, hope in adversity, and sacrifices for a cause greater than self-interest. The tributes he pays here to men and women who have lived truthfully will stir the hearts of young and old alike, and help prepare us for the hard work of choosing our destiny.

Ranging from the shattered gentility of Edith Wharton's heroines to racial confrontation in the songs of Nina Simone, American Rhapsody presents a kaleidoscopic story of the creation of a culture. Here is a series of deeply involving portraits of Am...

It Ended Badly
by Jennifer Wright

It Ended Badly: Thirteen of the Worst Breakups in History is a history of heartbreak-replete with beheadings, uprisings, creepy sex dolls, and celebrity gossip-and its disastrously bad consequences throughout timeSpanning eras and cultures from anci...

Character Is Destiny
by John McCain

In Character is Destiny, McCain tells the stories of celebrated historical figures and lesser-known heroes whose values exemplify the best of the human spirit. He illustrates these qualities with moving stories of triumph against the odds, righteo...

Executive producer and host Mike Rowe presents a delightfully entertaining, seriously fascinating collection of his favorite episodes from America’s #1 short-form podcast, The Way I Heard It, along with a host of personal memories, ruminations...

In an age in which the lack of independent public intellectuals has often been sorely lamented, the historian Tony Judt played a rare and valuable role, bringing together history and current events, Europe and America, what was and what is with what...

Get Well Soon
by Jennifer Wright

A witty, irreverent tour of history's worst plagues-from the Antonine Plague, to leprosy, to polio-and a celebration of the heroes who fought themIn 1518, in a small town in Alsace, Frau Troffea began dancing and didn't stop. She danced until she wa...

War is a Racket
by General Smedley D. Butler

After his retirement from the Marine Corps in the early 1930's, General Smedley D. Butler embarked on a national lecture tour, where he gave his speech about how commercial interests benefit from war. The speech was well received and he wrote an exp...

In this candid new political memoir from Senator John McCain, an American hero reflects on his life—and what matters most.“I don’t know how much longer I’ll be here. Maybe I’ll have another five years. Maybe, with the a...