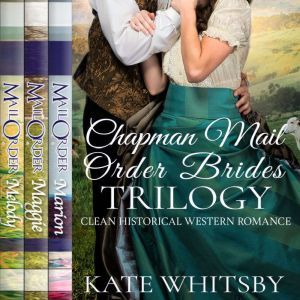 Three brides for three brothers. Can they find the right match in time to secure a happy future on Snake River?

Marion, Maggie, and Melody know neither each other nor the three Chapman brothers they’re set to marry. On arrival at the remote cabin on Snake River, the women doubt their pairings and reconfigure their matches to secure better marriages. The group get to know each other over two weeks in the cabin, igniting a flurry of conflict and attraction. All three brides have their reasons to be there, but the greatest mystery is Melody, who has been silent from the start. What secrets is she carrying, and will she open up before the marriages take place?

The Chapman party is setting off for Idaho to get married, but Maggie has a problem: her intended fiance, Parker, will now marry Marion, and the brother she’s set her heart on isn’t interested. Maggie longs to marry Paul but struggles to adapt to her new life. Marion and Melody become like sisters as they teach her the survival skills she needs, but this closeness only leads to conflict as the women battle for the brothers’ affection. Can Maggie win Paul’s heart before the marriages are set in stone?

Melody’s intended groom, Prescott, has ended up with another bride, and she finds herself left at the church with the hesitant Paul. With the two other brothers and their brides already gone, Melody and Paul ride home through the snow-laden landscape. Isolated together on the road, Paul finally finds out who his quiet new bride really is... and she isn’t what he expected.

In the Chapman Mail Order Brides Trilogy, you’ll find captivating tales of love and sisterhood as three women get to grips with their new lives and struggle to find their places as the Chapman wives.

Immerse yourself in a world of love and friendship as three strangers grow to become sisters: click “Add to Cart” right now.